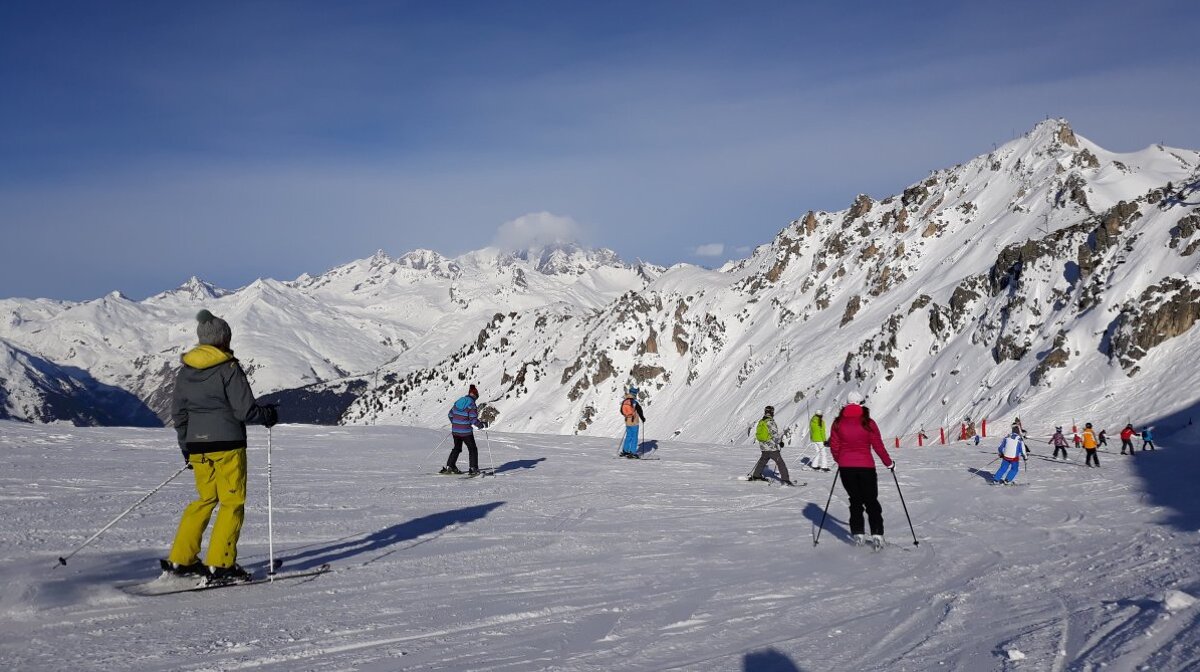 Regardless of whether you're an absolute beginner, a progressing intermediate or a blizzard-hardened expert, blue runs are for everyone. This is why the majority of pistes across Les Arcs (and probably the world) fall into this category and also why there is such a broad variety of blue runs on offer.

There are gentle wending pathways through the forests, wide open fields where you can pick a different line (and gradient) with every ride, pistes with hairpin corners that zig-zag down the mountainside and some runs which encompass all of the above. In this guide, we present you with a selection of some of the best blue pistes in Les Arcs whilst also providing a quick reference section to help you get from one resort to another quickly, riding only the easiest routes.

Accessible from the Arpette, Bois de l’Ours and Carreley chairlifts, this is a quick run for anyone wanting to get from Arc 2000, 1950, 1800 or 1600 to Plan Peisey (where the Vanoise Express double-decker gondola departs for La Plagne). It's not quite the most direct route but one of easiest and definitely one of the longest. At around 6.2km in length, the route takes in different environments and altitudes, making for an often varied ride where you've plenty of time to really hone your ski legs.

Start by following the Arpette run across the flat (and sometimes windy) top of L’Arpette peak, before taking a couple of sharp turns and heading to the top of the Vagere lift. Once there head left down the steeper section of Charmettoger which quickly flattens out into a wide, gently-inclined run. At this stage, it is worth keeping some momentum as snowboarders (particularly) have been known to grind to a halt at the Grand Renard intersection.

Keep to the left as you go under the Transarc gondola above the mid-station, so that you also pass underneath the Charmettoger lift, following the smaller blue run. This takes you past a restaurant, which is great for lunch or a quick beer on the terrace.

At the next junction, turn hard left to join Plan Bois. This is a lovely run through the forest but the mild incline means you either need to maintain some speed or prepare to skate (skiers) or scoot (‘boarders). Either way, when you reach the bottom of the Derby lift, which is particularly flat, it is extremely likely that you’ll need to skate or scoot to reach the next stage of this run, Forêt.

Follow this next tree-lined piste across three red runs before heading straight onto Retour Plan Peisey, which does exactly as it says on the sign. As you approach the Vanoise Express, the piste is steeper but wide, so feel free to throw in some additional turns where necessary. 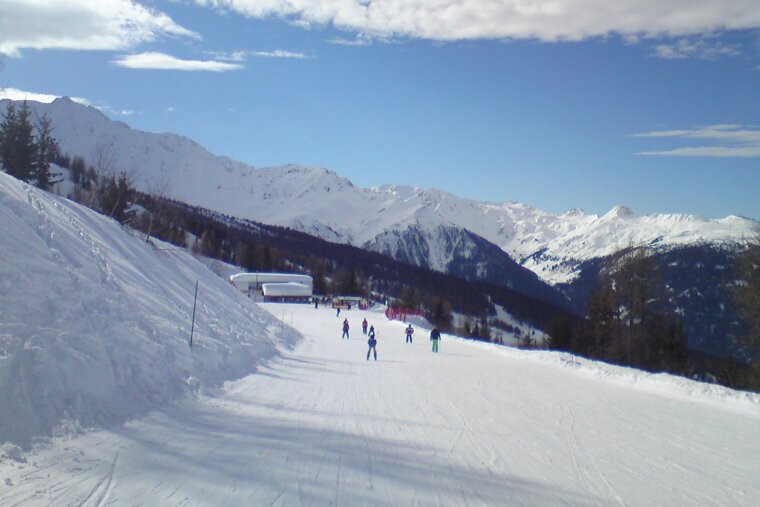 In contrast to the very long and meandering run above, Grive is very short and direct.

Starting at the top of the “2,300” lift above Peisey-Vallandry, and finishing at the bottom it's a very wide, high-altitude piste where you can zig-zag as much or as little as you like. It's perfect for building pace and confidence as heading flat-out straight down the run can be fairly steep and very quick (the “chrono” speed trap sits next to it). However, most people work their way down by traversing the piste from right to left, essentially choosing their own incline as they go. Boasting spectacular views, this run is a tiny treat for people of all abilities. 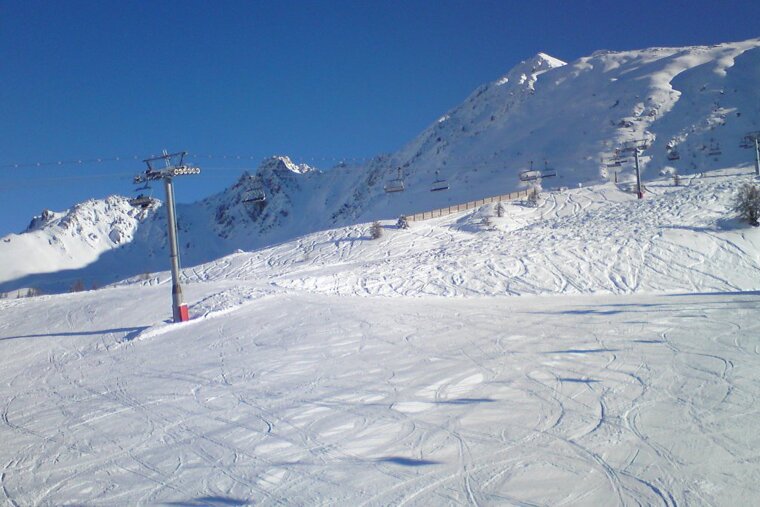 The highest of these is the Vallée de l’Arc which runs continuously down from the top of the Varet lift, just past the bottom of the brand new Pré St Esprit heated chairlift and the recently-updated Comborciere chair. At approximately 6km, it is very long and quite varied, with the altitude practically guaranteeing the best snow conditions throughout the season. Except for the last portion, the run is largely open and exposed, great when the weather is sunny and clear, but less fun when the cloud sets in.

Technically, the first 100m from the Varet gondola are part of the Arandelières red run; it starts above the blue run so retains its name/classification despite this minor segment being rather gentle. The opening few corners are quite sharp before the run heads towards the bottom of the Grand Col lift. It then takes sweeping curves past the top of the Pré St Esprit lift before heading directly towards Arc 2000 village.

Before the base station of the Arcabulle lift, you can stop off at a café which serves piste-side snacks and beverages. Do try to retain some momentum, however, as the next part is particularly flat and can cause unwanted stopping. Once the incline returns, it can be quite steep, although you can ameliorate the situation by using the piste’s ample width. At the bottom of Bois de l’Ours continue downhill through the valley until you reach the end of the run. 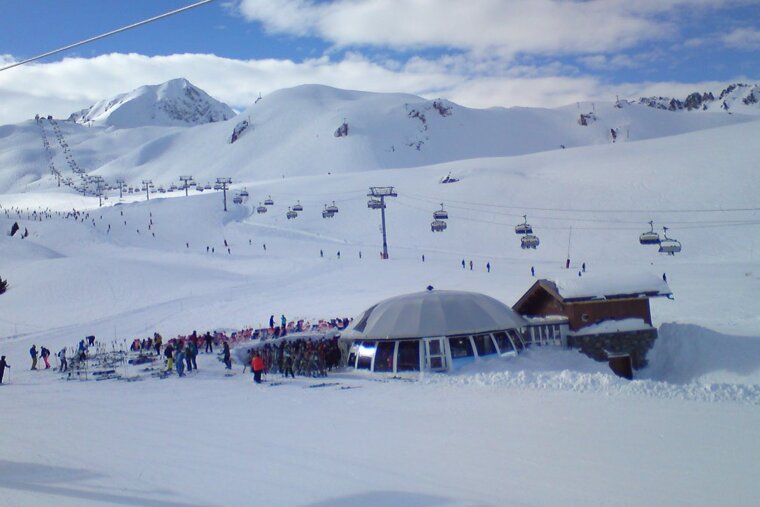 The Mont Blanc blue run above Arc 1600 is an absolute gem.

Whereas most blue runs are intermittently, sometimes frequently, crossed by other pistes, the position of this particular route means that there are only three junctions and no real intersections for its entire length. You can, therefore, concentrate on skiing without worrying too much about direction. There is a good variety of both incline and environment, with some easy (and some pretty full-on) off-piste immediately accessible.

As intimated, following Mont Blanc is surprisingly simple – turn right at the fork directly after the Mont Blanc lift and follow the piste down to Arc 1600. There is one designated option, shortly after the Arpette run joins you can turn right, but this little shortcut is often oddly bumpy, icy or otherwise unnecessarily technical, so it’s often best to follow the “main” run underneath the chairlift before turning right towards resort. 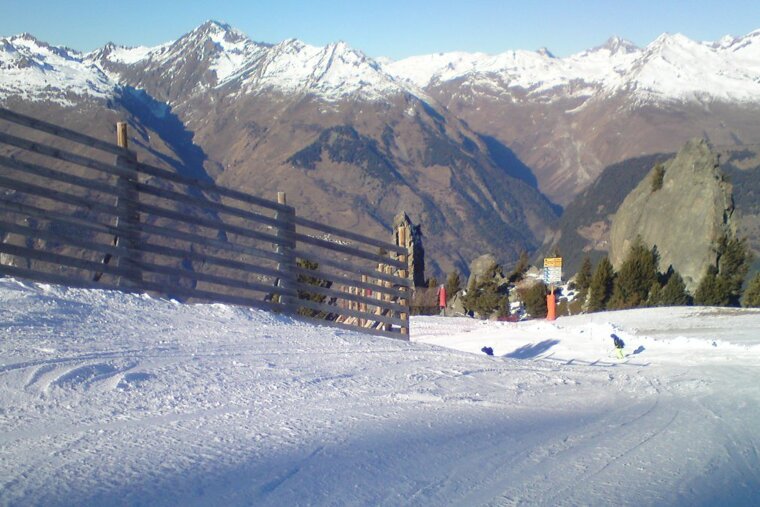 Another fun run near Arc 1600 takes you in a loop from the top of the Clocheret chairlift back to the bottom. Even in busy periods, this can be a quiet run despite its pleasure potential.

You essentially follow the Clapet blue run at the top of the lift, which sweeps round to the right before undulating and heading towards the Cachette lift. Next, you join Belvédère before turning right onto a brief section of Arpette which returns you to your starting point. Clapet intersects with the neighbouring Clocheret red run at a couple of different points, virtually inviting intermediates to test their skills on a slightly steeper, more technical piste. 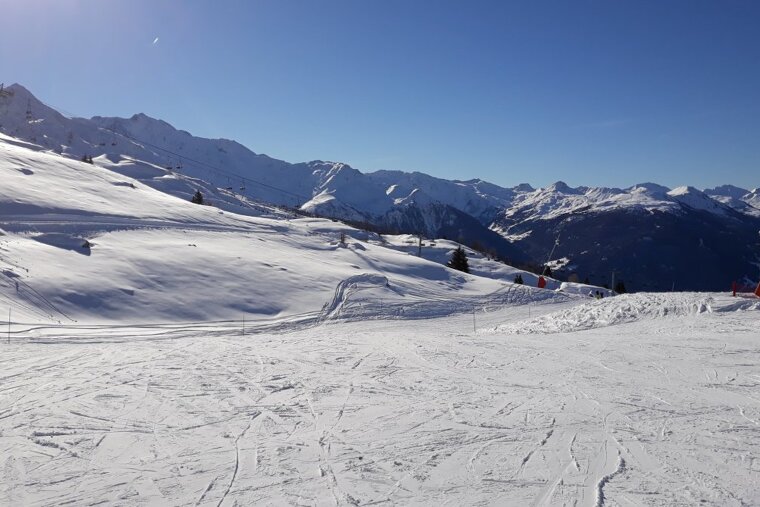 This run goes from the Derby lift, past Arc 1800, all the way into Arc 1600. It’s ideal for skiers who want to travel the length of Les Arcs from Peisey-Vallandry, possibly to take the funicular down to Bourg St Maurice. Excepting the minor use of Renard to start with, Traversée is one continuous piste which proceeds in an almost exclusively northern direction.

Descending from open mountainside at over 2,300m to the forested pathways just above Arc 1600, the snow conditions can vary significantly from zenith to nadir. The gradient is almost uniformly gradual with only two steeper sections: the very top of Renard and amongst the trees after the Gollet crossing. It can be a proper adventure.

Be aware that the last couple of kilometres are quite horizontal, so may lead to stopping, skating and scooting at times. 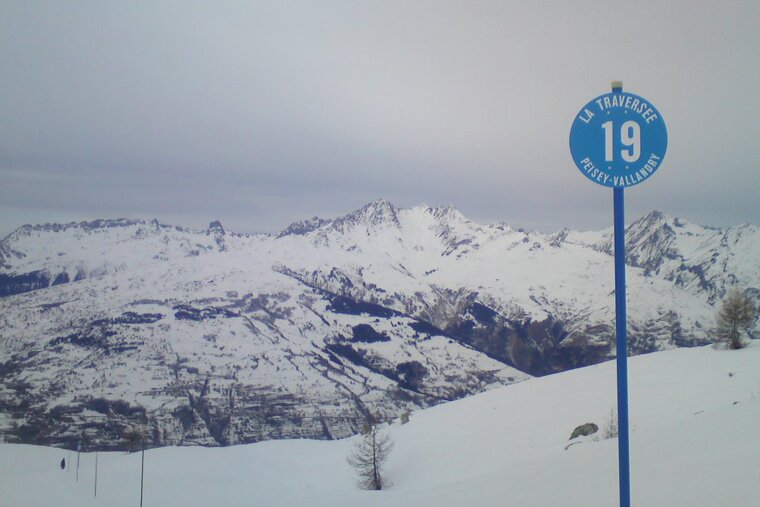 Getting from A to B using only blue runs

Here are some suggestions for travelling between resorts. There are almost innumerable possibilities, however, so get acquainted with your piste map, and prepare to explore.

Arc 2000 to Arc 1950: Take the Piste à Steph the very short distance, turning right to head directly into the village.

Arc 1950 to Arc 2000: The Cabriolet lift joins the two resorts but, if you insist on skiing, take the Piste à Steph to Marmottes lift. Ascend, then follow the Chalets piste into Arc 2000.

Arc 2000/1950 to Arc 1800: Go straight to the Bois de l’Ours lift using the Piste à Steph. From L’Arpette follow the Arpette run for two sharp corners before heading onto the Grands Mélèzes piste after the Vagere lift. This will take you down to the Transarc base station. Otherwise, you can stay on the Arpette run before abandoning it for Belvédère near the Arpette bar. Jump off that piste on to one of many blue runs which go into Arc 1800 when you see the resort.

Arc 2000/1950 to Peisey-Vallandry: Go straight to the Bois de l’Ours lift using the Piste à Steph. From L’Arpette follow the directions for the run “L’Arpette to Plan Peisey” as explained above, continuing on Forêt rather than joining Retour Plan Peisey if you want Vallandry as opposed to Plan Peisey. 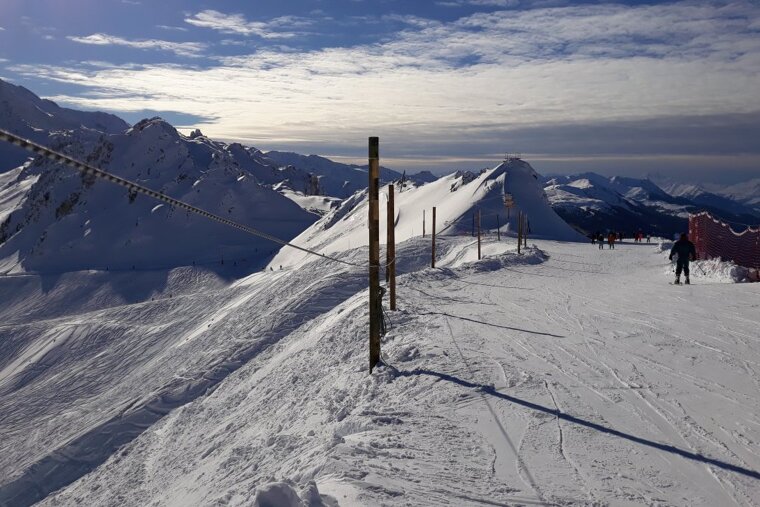 Arc 1600 to Arc 1800: Take Belvédère from the top of Cachette, jumping off at Chantel or Grands Mélèzes once you are above your target resort.

Arc 1600 to Peisey-Vallandry: Take Belvédère from the top of Cachette and follow all the way to Vallandry. Take care to stay to the left/uphill when crossing Grands Mélèzes to avoid missing your exit.

Arc 1600 to Arc 2000/Arc 1950: Take Belvédère from the top of Cachette to the Arpette lift. At L’Arpette stay left past the Carreley lift, joining Plan. Follow that run until the Igloo when you must head straight on (past Arcabulle) to Chalets which will take you to Arc 2000. Arc 1950 is a short way down the Piste à Steph.

Arc 1800 to Peisey-Vallandry: Take the Transarc to the mid-station and, alighting, follow “L’Arpette to Plan Peisey” as explained above, continuing on Forêt rather than joining Retour Plan Peisey if you want Vallandry as opposed to Plan Peisey. 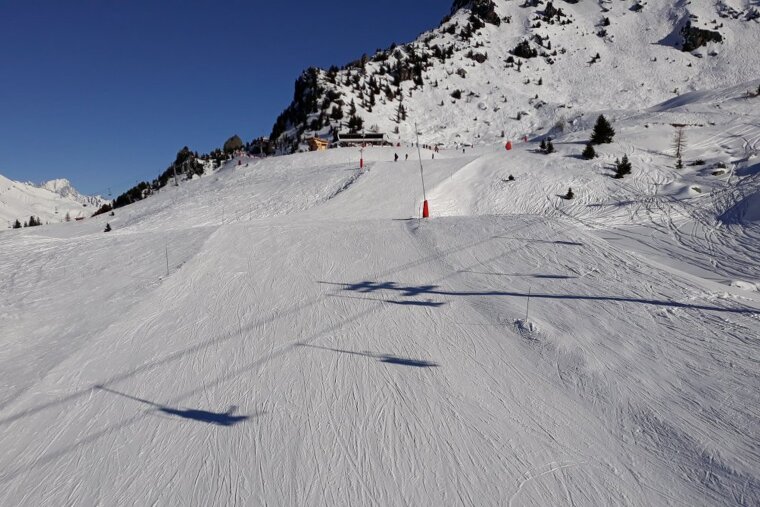 Arc 1800 to Arc 2000/Arc 1950: Take the Transarc to the Col de la Chal then follow the Col de la Chal run onto Vallée de l’Arc, then Chalets. Otherwise, take Plan des Eaux, joining Chalets at the large intersection near the Arcabulle base station.

Peisey-Vallandry to Arc 1600: Take the Peisey or Vallandry lifts before and joining Forêt just after the “2300” lift. Follow it to the Derby lift and go up. Thereafter follow the Traversée piste as discussed in more detail above.

Peisey-Vallandry to Arc 1800: Take the Peisey or Vallandry lifts before and joining Forêt just after the “2300” lift. Follow it to the Derby lift and go up. Take the Traversée run as far as the Transarc midpoint, where you can join Grands Mélèzes for Arc 1800.

Peisey-Vallandry to Arc 1950/2000: Take the Peisey or Vallandry lifts before and joining Forêt just after the “2300” lift. Follow it to the Derby lift and go up. Take the Traversée run as far as the Transarc midpoint. Board the Transarc to the Col de la Chal then follow the Col de la Chal run onto Vallée de l’Arc, then Chalets. Otherwise take Plan des Eaux, joining Chalets at the large intersection near the Arcabulle base station.

Villaroger to anywhere: Take the Replat, Plan des Violettes and Droset lifts in series. At the top of the third lift follow the Reservoir piste down to Arc 2000. Follow instructions from Arc 2000 to the desired destination.

Anywhere to Villaroger: This is a slightly difficult one as, generally, you need to take the Lanchettes lift from Arc 2000 and then ride a red section of the Aiguille Rouge piste before you can get to the blue runs down into resort. It's not the hardest section of red-classified piste on the mountain but it's not the easiest either and can get hard in windy conditions. If Lanchettes is closed, then the small Replat drag lift is opened past Comborciere but this is quite rare. Basically, you need to go to Arc 2000 then take part of a red run. 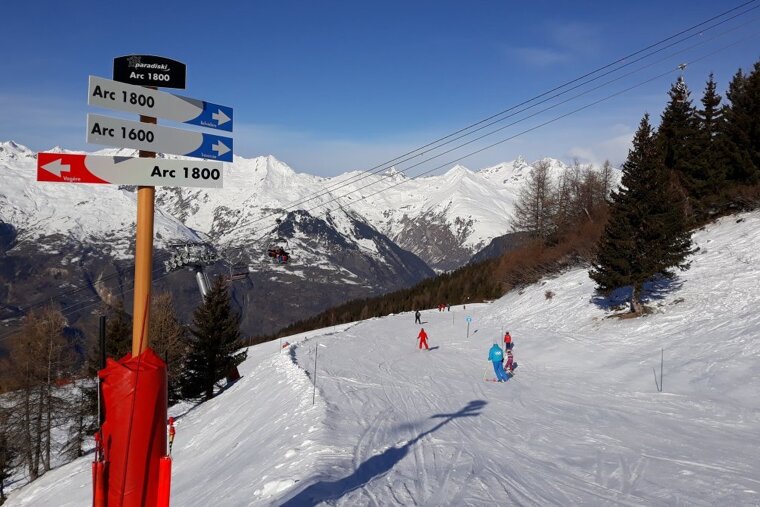