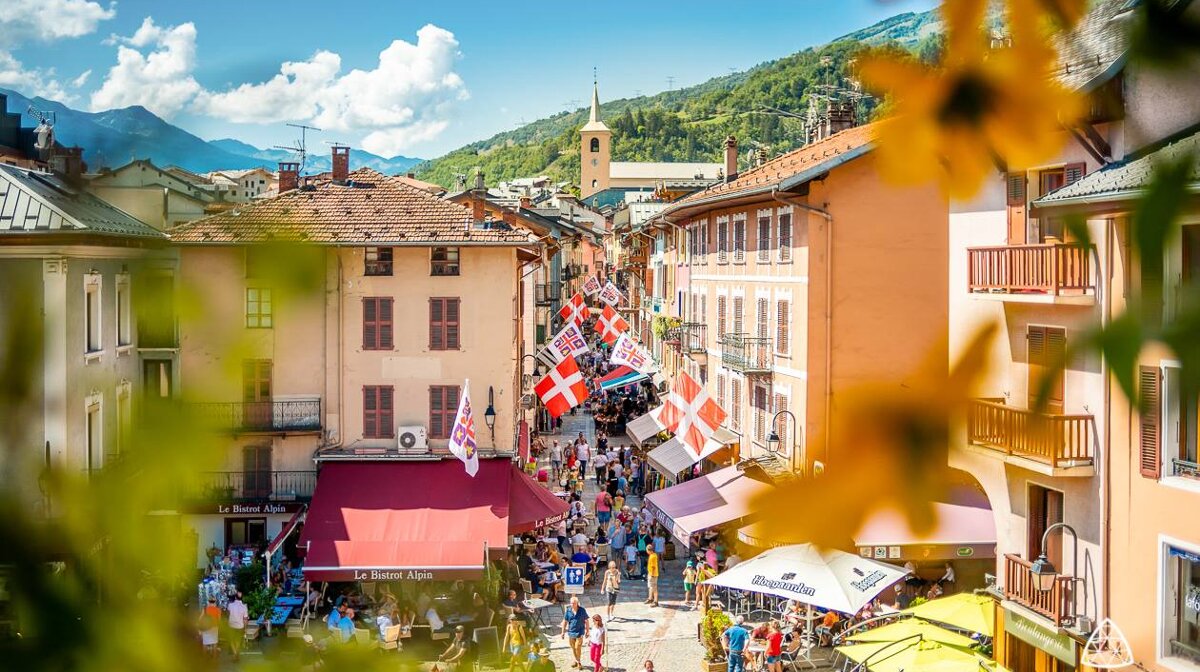 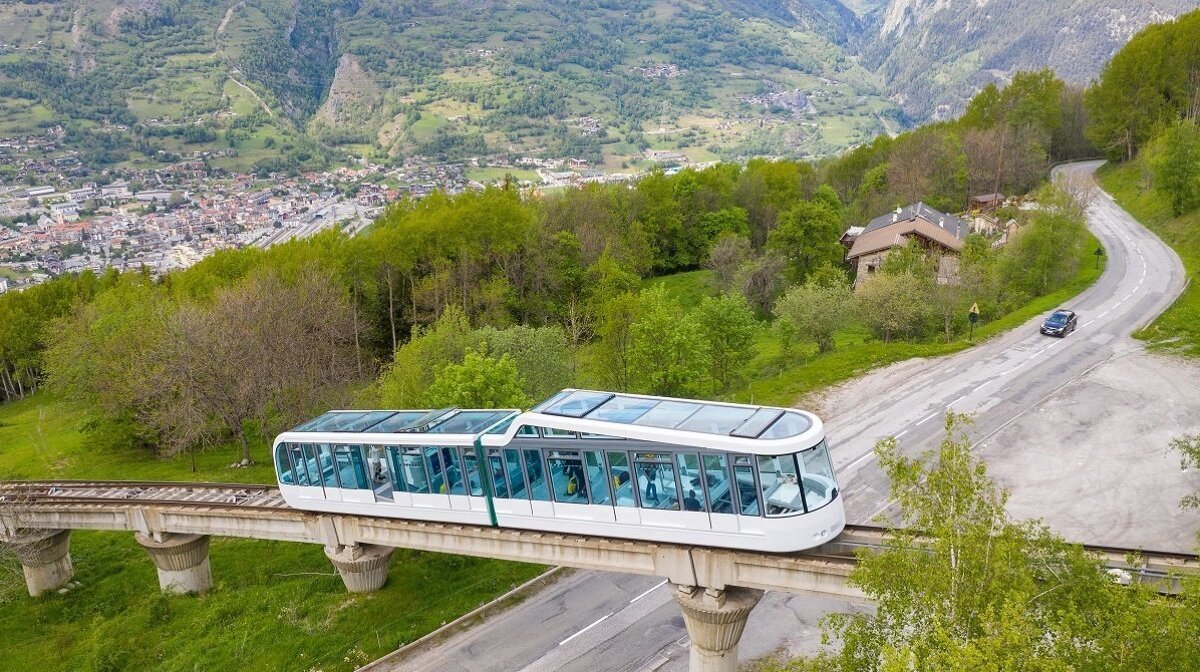 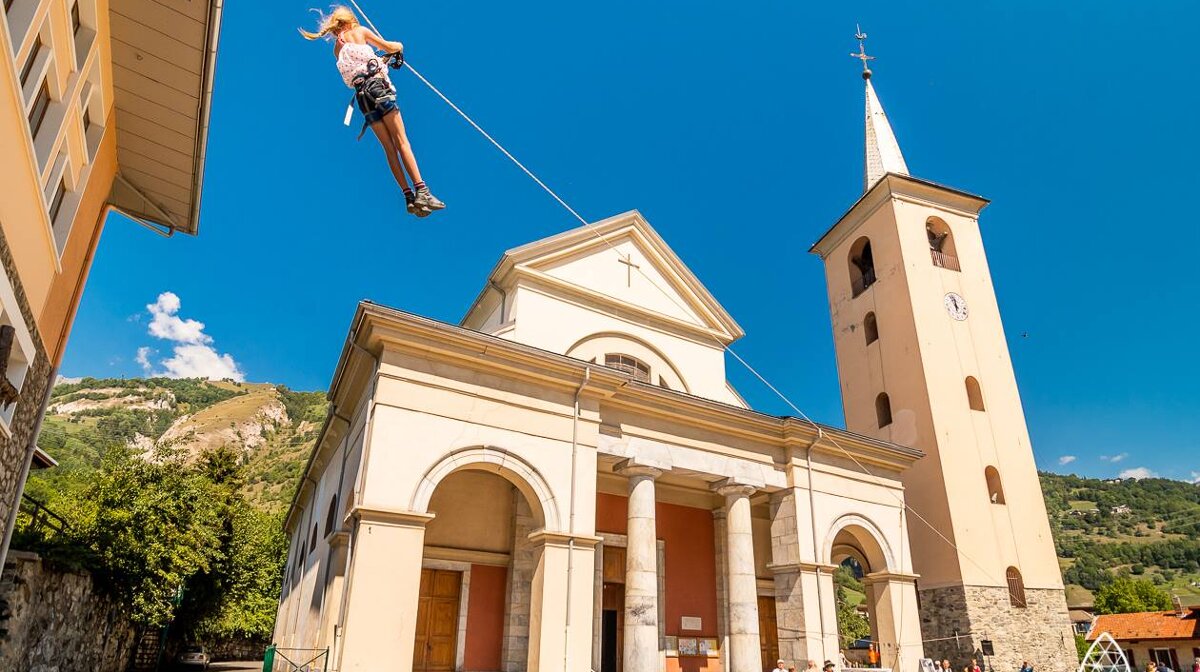 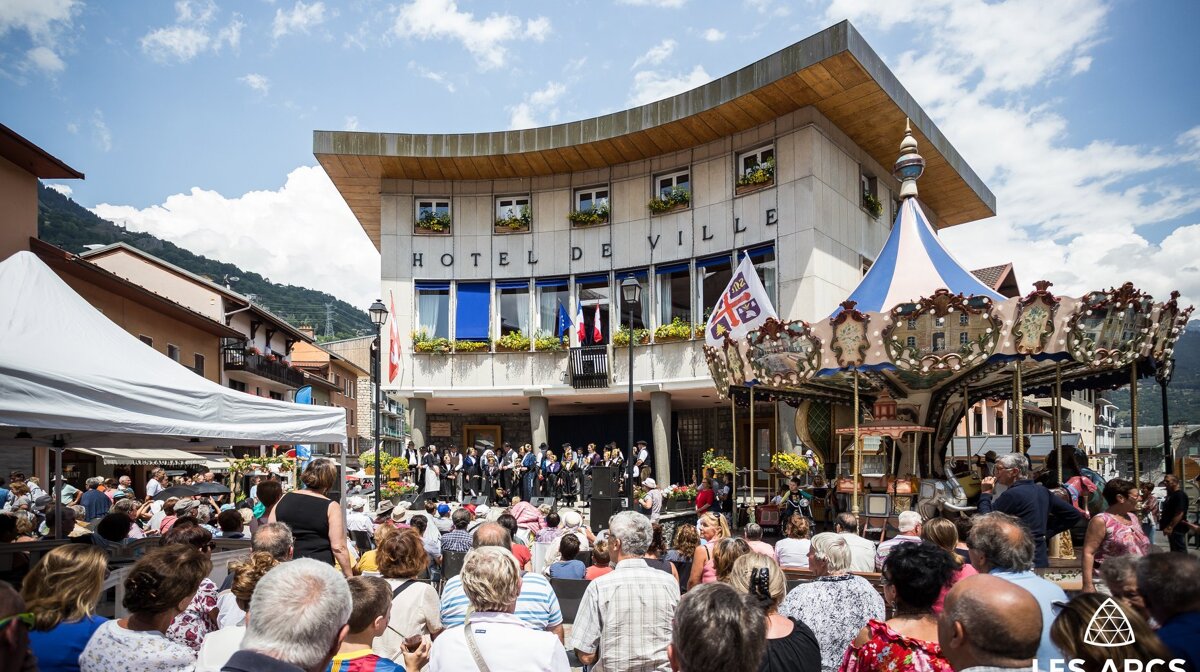 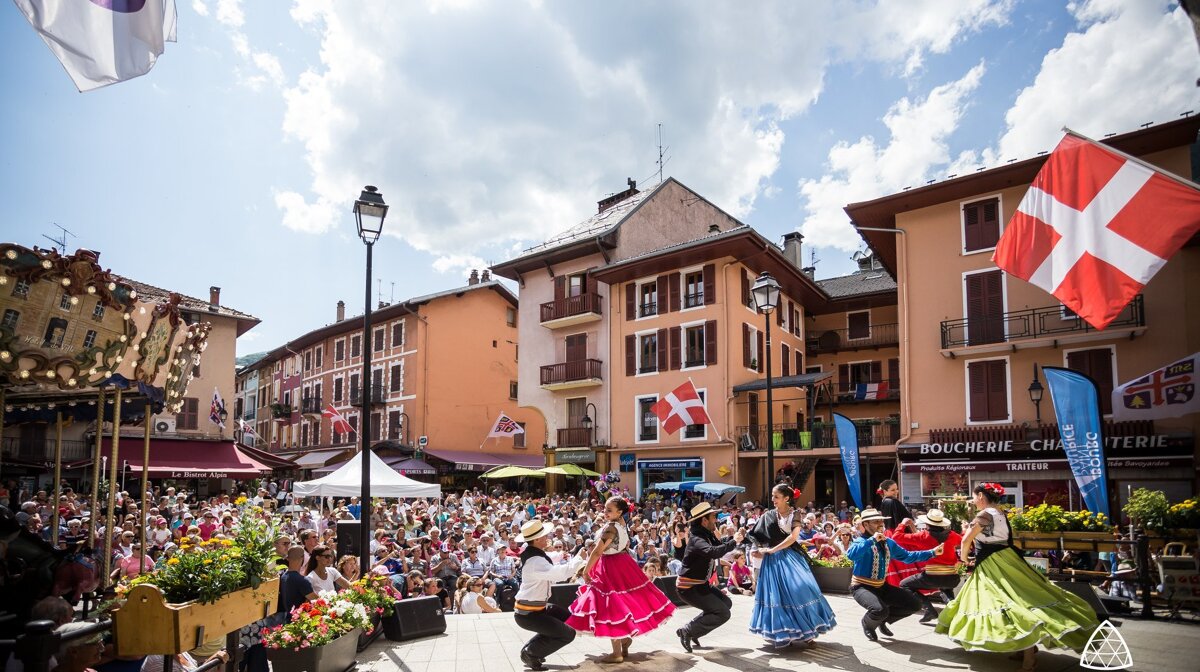 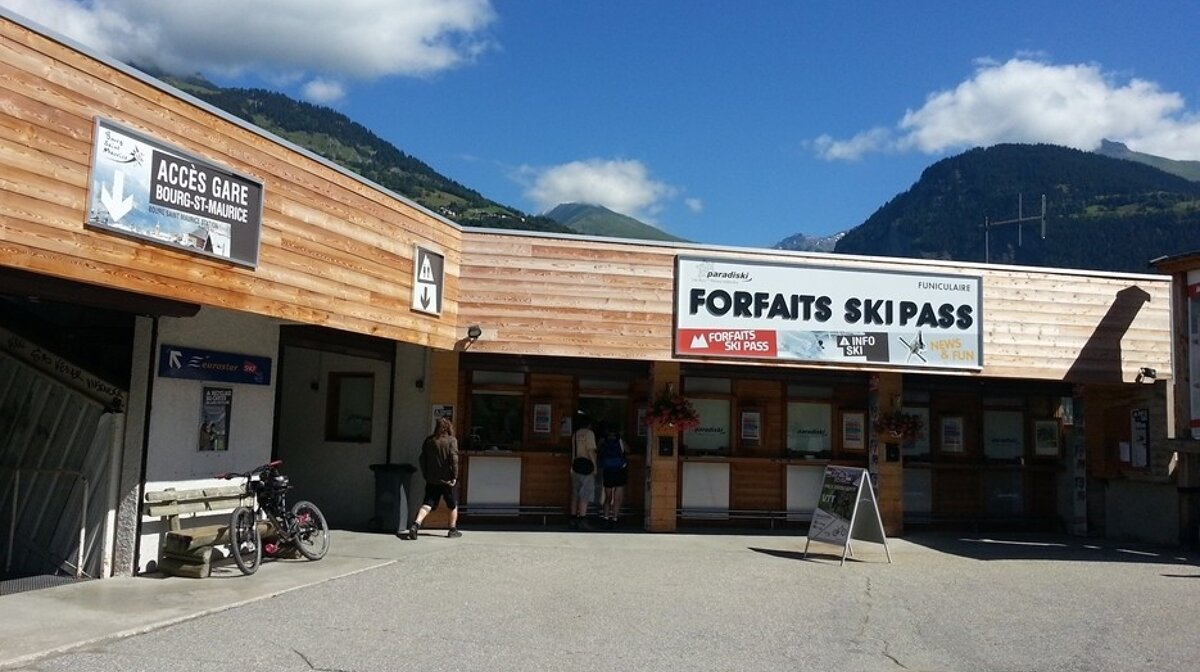 The funicular from Bourg to Arc 1600

The church in Bourg St Maurice

Bourg St Maurice lies in the middle of the Tarentaise valley and acts as a local hub for events, transport and commerce. It is the year-round beating heart of the Les Arcs area, boasting a train station which not only links to the mountainside resorts by a rapidly-ascending funicular railway but also provides international connections such as the direct Eurostar route to London. There are regular events throughout the year and innumerable places to eat, drink and shop.

Being the biggest town in the area, Bourg St Maurice provides services, goods and entertainment to the people of Les Arcs and many other popular resorts. The train station includes a coach terminal, from which you can board buses to La Rosière, Sainte Foy, La Plagne, Tignes, Val d'Isère and, in the summer, Italy. There is no shortage of retail options with everything on offer from commercial centre hypermarkets to tiny high street boutiques. Bourg is essentially big enough to have a cinema, a campsite and weekly markets but small enough to remain friendly and manageable, all surrounded by the spectacular mountainous landscape.

The economic capital of the Haute Tarentaise region, Bourg St Maurice sits approximately 10km from the Italian border. In the Gallo-Roman period the town was known as Bergintrum and, being on the main Roman road to Milan, was one of the last Gallic settlements before the route rapidly ascended over Col de Petit Saint Bernard into Italy. In the Middle Ages, Maurice became the patron saint of the area and the Tour de Rochefort, which is the last remaining edifice of a defensive keep from this period, still stands in the town centre.

Bourg St Maurice has a rich agricultural heritage with cheeses such as Beaufort being held in very high esteem. The wide variety of regional produce available in the area can be found at weekly markets, specialist shops (including the interminably-popular Coopérative Laitière store) and even the local supermarkets.

There are two annual agricultural festivals during the year, the Salon de l’Agriculture in August and La Démontagnée in October when the cows, sheep, goats and various other animals ‘come down’ from the mountain at the end of the summer and parade through the streets of the town centre. Another summer fair, the Fêtes de l'Edelweiss, celebrates the folk music, traditional costumes, arts and crafts (including lace-making and carpentry) of the Tarentaise region.

Les Arcs truly became a holiday destination in the 1960s when work began on Arc 1600, the first of the mountainside resorts. In 1974, this new village was connected to Bourg St Maurice via a lengthy cable-car. This was upgraded in 1989 to a two-train funicular, increasing capacity at the same time Arc 1800 was being developed. In 2019, to mark the 50th anniversary of Les Arcs, the funicular is undergoing a major refurbishment with stunning modern carriages and a new concourse area in the valley.

There is some interesting architecture in Les Arcs’ main town. The medieval Rochefort tower reveals a medieval focus on fortification, the quaint pedestrianised high street is lined with buildings sporting decorative architraves, transoms and balustrades (just look up) and the grand, early 20th-century train station which gained a bus terminal for the 1992 Winter Olympics.

The town has a three-screen cinema, Le Coeur d’Or, which often plays English-language movies (just look out for the ‘VO – Version Originale’ indicator on any UK or US-produced film being shown). There is also a large municipal pool where you can swim indoors or enjoy a jacuzzi during the winter. In the summer, the outdoor pool opens, complete with its extensive sunbathing area.

Perhaps the main attraction of Bourg St Maurice is the number of places you can visit from it. In wintertime, it is less than an hour’s drive to a number of ski resorts, including La Rosière, Sainte Foy, La Plagne, Tignes, Val D'Isère and even Les 3 Vallées. In summer, whether you are walking, cycling, driving or riding a motorbike, there are roads leading straight from the town to, amongst other things, the Italian border, spectacular mountain passes made famous by the Tour de France, precipitous ancient fortresses, high-altitude lakes, national parks and panoramic views. It is certainly difficult to get bored when you are surrounded by mountains.

Things to Do in Bourg St Maurice

Obviously, one popular course of action is jumping on the funicular railway and heading up to the Les Arcs resorts, primarily for skiing in the winter and mountain biking in the summer. However, Bourg is also a great starting point for everything from a leisurely walk to a multi-day hike, with walking trails leading in practically every direction.

There are equestrian centres within a few minutes’ walk of the town centre and the Isère river provides an internationally renowned course for white-water kayaking, rafting and canoeing. If you like clambering up rocks, there are via ferrata protected climbing routes dotted around the area, with the closest two probably being Les Bettières in Peisey-Nancroix and Le Roc du Vent near the Cormet de Roselend.

Throughout the year, the town hosts a wide variety of events, concerts and festivals, so it is worth keeping up to date with the Les Arcs ‘What’s On’ calendar.

If you are looking for something to eat, you are not short of options. For hearty, reasonably-priced and traditional Savoyard fayre in a convivial atmosphere, you really cannot beat Le Refuge on the high street, although it is worth booking a table in advance. Le Bistrot Alpin, opposite the town hall, serves more contemporary French dishes and is particularly pleasant in the summer months when the tables stretch out into the main square, so you can dine whilst people-watching. If your tastes are more international, you can enjoy Thai cuisine at Cherry Garden opposite the Albert Martin Stadium, Algerian tagines and couscous at L’Oasis adjacent to the bus station, or even all-you-can-eat oriental and fusion food at L’Indochine, just up from the train station.

If you are simply looking for a quick bite check out the coffee-lovers’ paradise, Pause Coffee & Kürtös, which always has a selection of fresh and healthy lunch (or brunch) options. Next to the gorgeous, family-run Chez Roger bar, you will find both Station Pizza with its huge menu of takeaway pizzas and the friendly Kebab La Haute Tarentaise restaurant which serves great kebabs at a good price (ask for the samurai sauce).

Where to Eat in Les Arcs

Despite its large number of bars, the nightlife in Bourg is fairly relaxed, with events dominating the late-night scene. There are no real ‘clubs’ to speak of, but there are regular DJ evenings and concerts at a variety of locally-known ‘hot spots.’

For an early evening drink, head to Chez Roger on the main road (D1090) through town or Le Tonneau, with its large outdoor seating area, which is a bit further down past the railway station. On the tiny high street at the Iseran Kfé bar, you can expect to find a weekly set from the vinyl-only DJs ‘48 Litres of Funk’ which can go on late into the night. Cherry Garden, the Thai restaurant, and L’Entrinque bar also regularly feature live music drawing big crowds. With the large Espace Savoie venue hosting music of all kinds (pop, rock, folk, metal, you name it...) throughout the year and frequent outdoor concerts throughout the summer, keep an eye on local events to keep ahead of the curve.

The vast majority of chalet accommodation is found in the easily-accessible mountain resorts of Arc 1600, Arc 1800, Peisey-Vallandry and Villaroger. However, there are still a number of larger properties available in Bourg St Maurice, providing the perfect base for accessing both Les Arcs and the surrounding areas. Click below for all the available options.

Bourg is the perfect place to stay if you want to explore multiple ski areas or enjoy a variety of summer activities. There are always apartments available to suit every budget. Click below to find out more.

Again, most hotels are found on the mountainside. However, there is a selection of mid-range hotels in the valley, catering for keen skiers and snowboarders in the winter and cyclists, motorcyclists and walkers in the summer. So if you are looking for a shorter stay, click below.